Flashing Palely in the Margins
September 15, 2019

Ivanopoblano is located at 390 Wharncliffe Road South in London, Ontario. The menu features the best chilaquiles you’ve ever had.

I’m not sure when I first fell in love with chilaquiles, but it was at the Boon Fly Café in Napa that I realized that they had quickly become one of my favourite meals—one that I would seek out and travel distances to eat, when done exquisitely well.

At its core, a dish of chilaquiles is a dish that excels in its simplicity: lightly-fried chopped tortillas, covered in salsa or mole, garnished with some queso fresco or some crema, or sometimes both. There are a multitude of variations, but the dish is best when it embraces the simplicity of its ingredients, and when it is compiled with care.

A few months ago, learned that Ivanopoblano made chilaquiles. 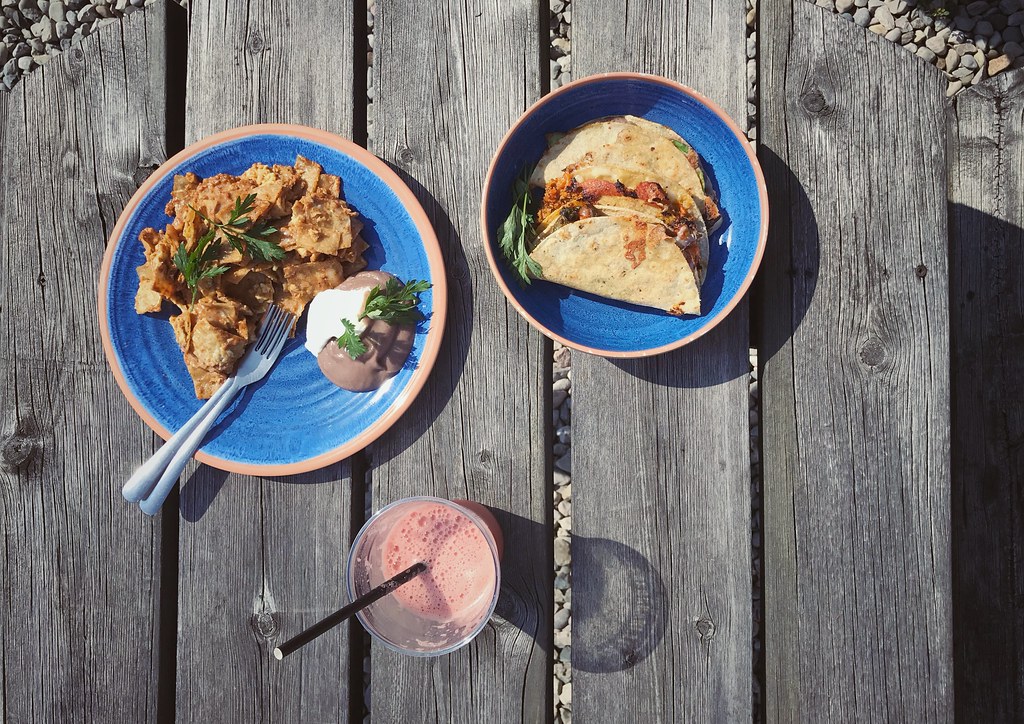 I had already been smitten with Ivanopoblano’s quesadillas, so when chef-owner Ivan Santana-Barnes made a passing comment about making chilaquiles with his mother’s old recipe, I knew I had to make a trip over to the east side of the city to try them.

Santana-Barnes does all his cooking out of a trailer* in a parking lot of a health food store—he is moving to a permanent location in October 2019, but has been in the trailer since he decided to open his own eatery—and the gustatory delight that he is able to create in a trailer is unparalleled. His ratatouille quesadilla was what initially won me over: it had all the savouriness I expected from a ratatouille I would eat in a French kitchen—the incredible flavours from the stewed vegetables swimming in a saucy garlic-forward sauce—but all the delight that came from eating the dish with my hands, sandwiched in the fold of a tortilla shell.

His avocado quesadilla, a seemingly-simple amalgamation of avocado, beans, and salsa in a tortilla, is another show-stopper, mostly because of the perfectly-cooked and impeccably-seasoned beans; I was very excited to hear that the chilaquiles would come with a healthy side serving of those same beans.

The chilaquiles were the best I’ve ever had. The tortilla shells, delicately-chopped and pan-fried, are lightly-crisped and have no remnants of grease on them that often accompany the dish at other establishments. The salsa is flavourful yet subtle: Santana-Barnes lets the tortillas do the heavy lifting in the dish, and it pays off. Complemented by his standout beans and washed down with a freshly-made agua fresca, Ivanopoblano’s chilaquiles remind you why you love them in the first place: because a simple dish, made with love and care, is one worth traveling across the city to enjoy.

* Since this was posted, Ivanopoblano has moved to a permanent location on Wharncliffe Road South. The trailer may be gone, but the incredible food and sheer delight remains.