We were able to procure some smoked perch from the market last weekend, so a few days ago, I made kedgeree for breakfast.

The first time I ever ate kedgeree was at a restaurant in Montreal; it was their signature dish, so there was no question of what we should order. The mix of rice and fish and egg and spices was divine, but also reminiscent of meals from my childhood—especially one that we called kitchari; I realize now that the names and dishes may be related—full of rice and spice and flavor.

Kedgeree is a simple dish—it takes some time to cook, but the steps themselves are not complicated—that, upon completion, looks a little like a bunch of yellow-brown mush, but tastes incredible. I’ve realized recently that a lot of the food I cook is similar: simple, tasty, not particularly visually-arresting. And that’s okay. 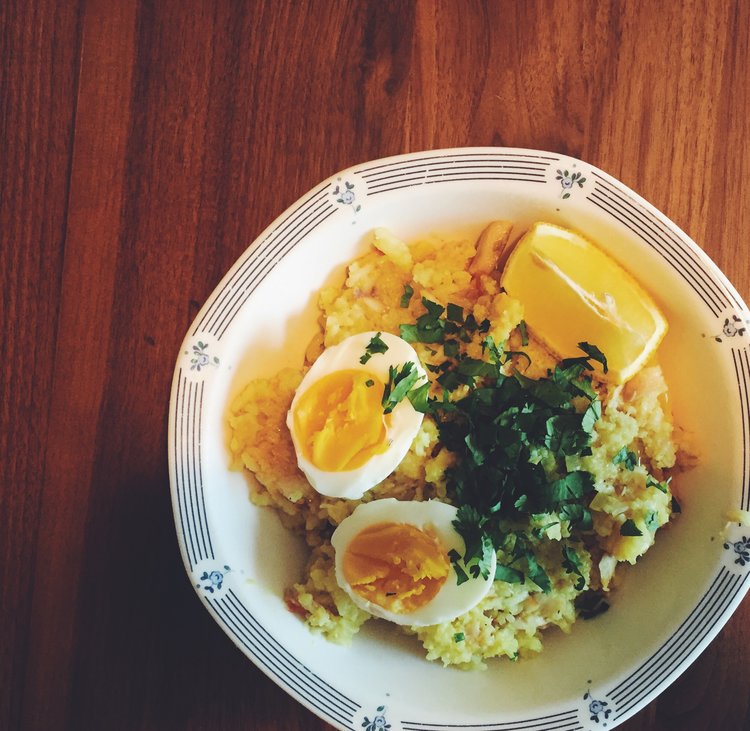 From Kat Kinsman’s In Praise of Ugly Food:

Aesthetics are a poor predictor of goodness; that there are other qualities to consider—the most important of which, to me at least, is the olfactory. When presented with, say, a muddy bowl of beef stew, I’ll sweep my nose down low over it and inhale, like Hawkeye Pierce over his powdered eggs in the MAS*H mess tent. For him, it was probably preventive. For me, it’s a tease of impending pleasure. But before I take my first bite, I will lovingly snap a photo of it and post it to Instagram or Facebook, chronicling the dish the same way I did my dorky classmates back in high school.

I know it may seem foolish to use a visual medium to capture the way we eat, but until Smellstagram and Snaptaste technology appear, it’s one of the best ways we have to celebrate the overlooked, while at the same time documenting our not-so-camera-ready colloquial chow for future generations. Unless, of course, we want them to think we were a civilization fueled entirely by green smoothies, avocado toasts, and baked goods tied up with red and white baker’s twine alongside mini milk bottles. Such a twee vision of our culinary culture would be a tragic misrepresentation of the foods America does best. I fear that Instagram, blogs, and glossy mags continually bump my favorite foods from their collective menus in favor of eye candy. I’m terrified that the less-lovely and monumentally delicious ducklings will be lost to the ages, overshadowed by prettier dishes in this new era of visual gluttony. If they aren’t beautifully documented, Pinterested, or posted, they must not be worth it.

Our bookshelves and coffee tables at home are covered in books and magazines with stunning photos of dishes plated perfectly with dashes of color. Like how the images of models in magazines are not indicative of everyday human bodies, the snapshots of food are not representative of the meals we make every day: simple, delicious, filling. We may not put pea shoots on everything or drizzle sauce on the edge of the plate, but that doesn’t mean we don’t enjoy dinner, just the same.

And now, time to eat some leftover kedgeree for lunch.