Still coping, still healing, still trying to process it all.

In the meantime, here are some excellent pieces of writing from some very smart, articulate people who are doing a good job of summing up the impact that Prince had on all our lives: 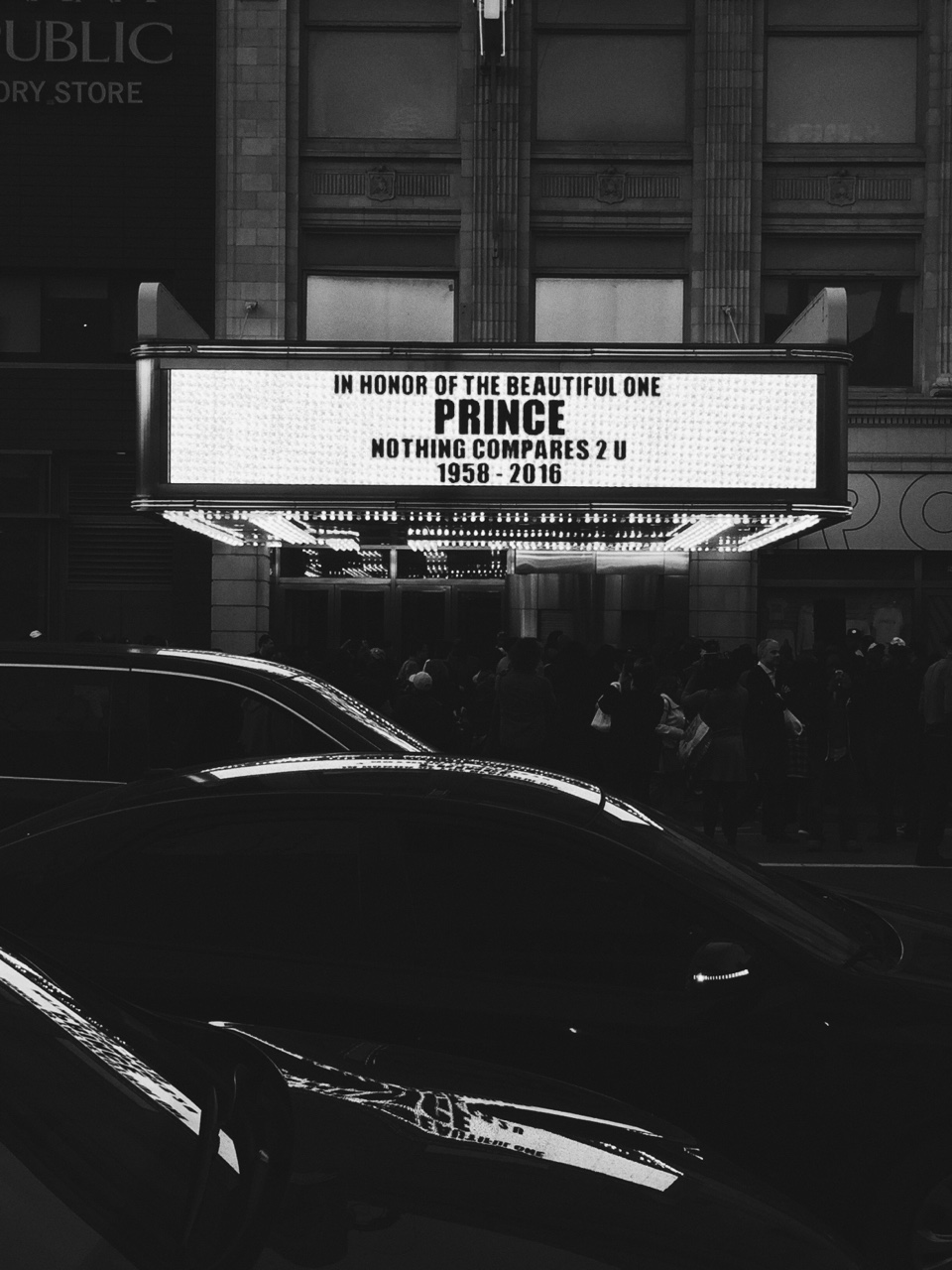 Earth Was Lucky to Get 57 Years of Prince:

Only Prince could make a song that has the arc of a sermon, with the passion of an orgasm. You feel like you’re catching the holy ghost as it takes over your body, but halfway through you realize that’s not Jesus, you’re actually just having sex. And after the song’s final two minutes transforms you, sending you to a place you typically are fearful of visiting, it just ends. And just like that, you look down, and it’s your own personal Garden of Eden. Figuratively, and perhaps literally, you realize you’re naked.

There Are Thieves In The Temple Tonight:

There is the kind of genius that works hard. You see Michael Jackson’s sweat and tears. Beyonce wears her hard work like a badge. They tell you that with hard work you could be great, too. You put them on your playlist to suit for the game.

Then there’s genius that makes the impossible seem inevitable. It is effortless. You can never attain it. You can’t earn it or deserve it. You can only float in it for a time. That was Prince Rogers Nelson.

When death comes too early, chaos reigns in its wake:

Prince was a Visionary. A Dreamer and a Believer. But most of all, he believed in those whom his music touched. To watch him perform was, as he encouraged, “To see the dawn.” There was a new-ness, a freshness, a coolness that seemed to exude from his every pore. I’ve been asked, “What was it like to create and perform music with Prince? ” My rebuttal was usually a tongue in cheek, “Ask him what it was like to create and perform with me.” It’s an answer that he would understand because it comes from the boldness that he played a part of instilling in me. I will share with you now, that the truth is, I never knew what it was like, creating with Prince.

I’m done drawing lines around what sorts of things should make me happy and amass my interest; I am now old enough, and tired enough, that I am willing to accept whatever makes me happy, because the numbers of such things are dwindling, and will continue to do so.

And not even “happy,” really; more like ecstatically, jubilantly, childishly, childlike-ly content. Look, I don’t have kids. I don’t have a partner. I’m staring at 40. I know which side my bread is buttered on - and on the subject of butter, I, like Bilbo, I feel thin, stretched, and scraped over too much bread.

It was these stories that made us listen to every song, every note, to try to understand the secret of what made him so electric and magnetic to everybody in town. It didn’t take long to figure it out: Prince’s secret was that he could be your everything… but only if you were willing to expand your own horizons and be better than the person you were. If you were a man and wanted to really get with what Prince was all about, you had to learn how to drop the macho bluster and get sensitive, clean up, and find some style. If you were white, you had better find your soul. If you were black, you needed to accept that rock and roll was not “white music” but your own heritage. If you were a woman, you needed to be more aggressive than maybe you were raised to be. If you were a biracial American, drawing your heritage from a mix of of people from all over the world, then Prince was telling you to not find that mix confusing but liberating.

How a Local Radio Station Became the World’s Prince Memorial:

A day before, McGuinn got a phone call from Prince’s agent.

“He said, ‘I was talking to Prince today and we want to come to your party,’” he said. “So I called First Avenue [the concert venue hosting the event] and they said, ‘Great. We’ll put you on Purple Alert.’”

In other words: Prince was going to so many local shows they had a special name for it.

The Beautiful One: Remembering Prince’s Rich Life And Legacy:

One reason Prince’s death hits so hard is that in recent years he seems to have been coming to terms with his own legacy. Last month, he announced that he was working on a memoir titled The Beautiful Ones with Paris Review web editor Dan Piepenbring, due out next fall. Since January, Prince had been on a hit-and-run-style solo tour dubbed Piano & A Microphone, the genius sitting with an iPad and a keyboard he occasionally ran through pedals, à la his old LinnDrum, while he played through hits and sundry favorites. At those shows — the last of which he played in Atlanta just a week before his death — he discussed the music openly and with real candor: Introducing “Raspberry Beret” at a preview show at Paisley Park, he gave former keyboardist Lisa Coleman credit for hipping him to Bill Evans, then demonstrated by playing her harpsichord line: “That’s the whole song, right?” he said.

RIP To My Friend, Prince:

I have been fortunate enough to witness quite a few amazing talents in my career — landmark performers, singers, musicians and writers. But NOBODY was like Prince. Yes, the young Prince once practiced and dedicated himself to developing a skill set, but once his foundation was intact, the music, the ideas — both creative and promotional — flowed out of him like a raging river. There was no industry that was equipped to process and digest his ceaseless flow. Radio couldn’t keep up, record companies couldn’t market and promote fast enough, fans couldn’t re-focus fast enough. His songs were like a daily newspaper and he wanted them to be read while the news was fresh.

His brain never shut off. We wrestled with words to describe him — tireless, driven, obsessed, manic. But just maybe it wasn’t any of that. Maybe he was simply put here to be that funnel………to bring us the music and bring us the joy that accompanied it; to bring us the thought provoking lyrics and the effects they had on youth culture. To bring us the generosity ( much of which was incognito) that supported schools, music programs, young artists, ecological issues, social movements and people of all races and walks of life.

In a Special Sky: How Prince Escaped From Time:

The beauty of Prince’s dislocation from normal temporality was that he managed to fully embody his era while seeming almost magically free of its constraints. Like David Bowie, to whom he’ll be endlessly compared in the next few weeks, Prince seemed to inhabit a dimension of his own devising. But where Bowie’s freedom was secured by a careful edge of aloofness, that faint hint of a smirk that told you he’d already solved the game (and knew you’d love him for solving it), Prince could at times be startlingly exposed. Bowie was always disappearing into himself, always singing “give me your hands” from a stage where the hands couldn’t reach him. Prince, no matter how many layers of sunglasses and scarves and purple smoke and glinting wings he hid himself behind, often seemed as naked as he looked on his eponymous album cover.

This is who I am, his music seemed to say. You can touch me.

Prince’s music was blaring from speakers somewhere. We dipped our toes in slowly. Some of us bobbed our shoulders, pockets of people clapped, the drunkest guys tried to dance. I swayed back and forth and appreciated the diversity of the scene, which was New York in the very best of ways: moms and babies; hipsters of all races and creeds; every variety of natural hair; dudes who looked like they walked in off the set of Entourage; people who dressed like they came from the club; people who dressed like they came from doing laundry; at least one woman who was a dead ringer for Elizabeth Warren. In a neighborhood where there are still white bars and black bars, we were all together, because of Prince.

At one point, a young woman, used to the way things normally work in 21st-century New York City, ventured deeper into the crowd: “Is this the line to get in?” There was no line, we told her, no “in.” She was there.

On Prince, Blackness, and Sexuality:

A man. Clearly a man. A black man. Slight of stature, narrow of hip. Rising to global popularity in the 1980s, at the same time as another major American export: Hip-hop. A genre in which many black male artists releasing music on shelves alongside Prince’s albums—Run-DMC, LL Cool J, Ice Cube—projected an urban toughness. Leather jackets thick as armor, heavy gold chains, bold aggression. But Prince was a flirtatious, peacock pastiche made of diamonds and pearls, a dandy in paisley and lace. Some rappers’ personas aligned with the age-old oversexed, “primitive,” mandingo stereotype invented by white slaveowners. Prince defied stereotypes, period.

Why There Will Never Be Another Prince:

Where Bowie was great at being so many people, Prince’s gift was showing so many sides of himself. The expressions of raw sexuality were so pointed and clever, and the romanticism was so measured, each with equal parts self-assuredness and self-awareness. He knew what he was capable of on “Do It All Night,” but was fully aware someone else might get there first. He’d somehow lost his woman to the dude she brought for them to play with on “When You Were Mine,” and yet wanted her back with no equivocation. And “Adore,” with its soaring declarations of love and the groundedness to say that she better not lay a finger on his car, is as real as any love song has ever been, even if some of that love was for an automobile. Being shy in Prince’s world was useless, no matter how crass or uncomfortable the truth may have been.

Prince wasn’t Bob Marley. His music wasn’t supposed to change the world. It was the world as most could only wish it was. It was the soundtrack to dreams, even if it seemed like his real life. Because the dream for so many is freedom, to be liberated from convention and guided by how they felt, no matter what that feeling was.