Flashing Palely in the Margins
January 4, 2015

We had breakfast on the ferry. It is a greasy breakfast, full of fried eggs and sausages and potatoes, but a couple of times a year, ferry breakfast is the best meal; it is the marker of a few days about to be spent on a small island off the Pacific coast, surrounded by trees and ocean and quiet.

It is, indeed, quiet here. There is a calmness around the cabin, a stillness only broken by the footsteps of the woman I love as she unpacks her bag while I stare out across at the cargo ships in the distance. Even the trees refuse to rustle, for now, as if to welcome us to the island, to welcome us to a sense of quietude which will be the marker of the next few days.

Even when the wind picks up and the rain starts to fall, as it undoubtedly will at some point over the next few days, the stillness will persist; we will be calm, rested, ready to start a new year with serenity, with hope, with happiness. 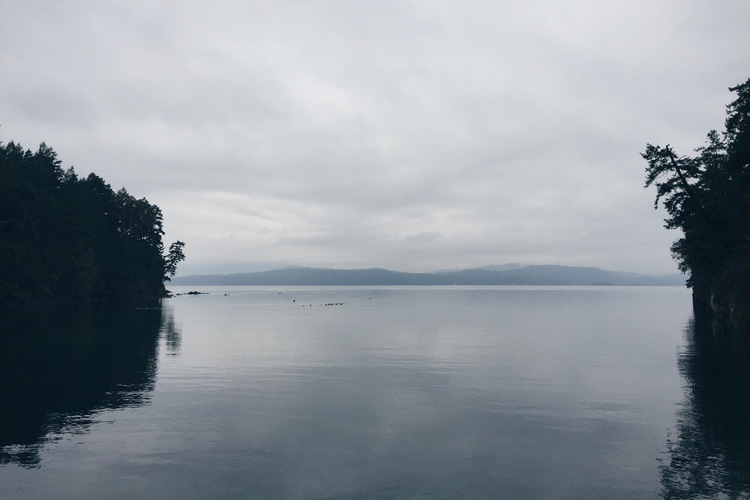 The rain began today, enveloping the entire island in a cloudy mist that permeated your pores even when the drizzle had stopped for a little while. There were moments, of course, when the clouds broke open to reveal the sun, but they were brief; the sky quickly darkened and the precipitation began, again.

We spent most of the day indoors, reading, talking, snuggling by the fire. The birds, too, seem to look for a place to congregate together and find shelter from the weather: the birdfeeder on the porch was a hotspot of activity.

We pulled the Audubon guide off the shelf and tried to identify the birds, with some success. When we were tired of that, we made meals, or watched Netflix, or retreated into our little pockets of solitude and attacked the stack of books we had brought with us.

By night, the rain had stopped, the clouds had cleared, and bright, vivid full moon looked down upon us, brightening the sky. We stared skyward for a long time before going to bed. 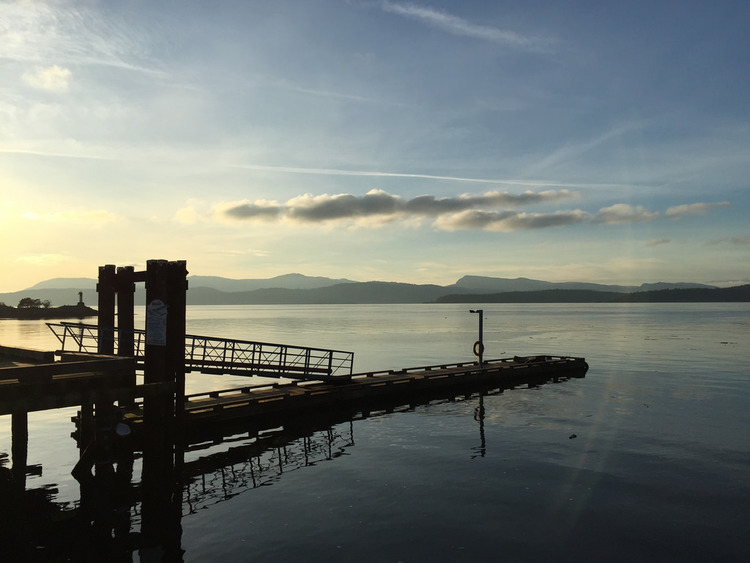 The sushi place on Pender Island uses black rice in all their rolls and in their nigiri. The rice looks less black and more purple, actually, giving the sushi a almost-disturbingly-fake appearance, as if you are eating a stylized, plastic meal photographed for the pages of a bad food magazine.

The sushi itself wasn’t bad; it was a nice post-market, pre-ferry lunch to close out our trip to the island. The farmer’s market was small and disappointing — a few people selling knit goods, some preserves, and a woman selling her children’s book — but it was still nice to say hello to some of the local island residents while there.

It was the short time we spent near the Roe Islet that I’ll remember most from our last day on Pender, a quick morning diversion that took us to a beach on Ella Bay surrounded by nothing but Douglas firs, the rising Pacific tide, a murmuration of starlings, and deep silence. It was the kind of silence where the flapping of a raven’s wings resonated loudly through the still air, where the tide against the shore sounded like waves crashing against rocks. It was a silence conducive to quiet contemplation, deep reflection.

A sea otter peeked its head up to say goodbye as we left the Roesland park. Now, we await our ride home: the ferry I can see out in the distance, slowly approaching the quay to take us back to the mainland.