Flashing Palely in the Margins
December 6, 2016 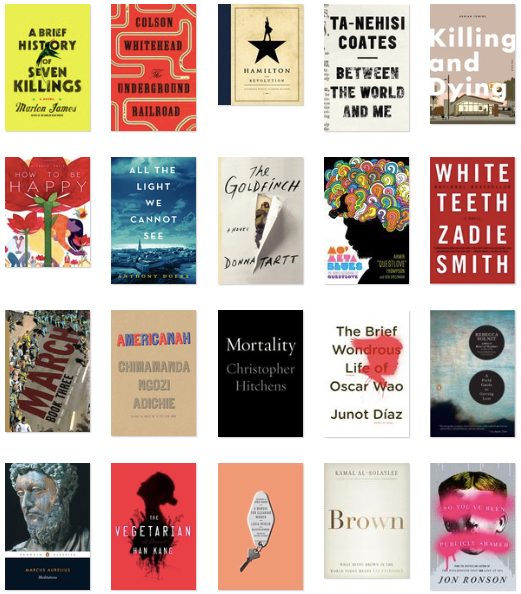 A year in reading.

On January 12, 1964, my grandmother lost contact with my father—then a young boy—who had been scheduled to head back to Zanzibar from the mainland that day. The revolution was harrowing: my grandmother and her family sought refuge in the local community centre, while they waited for news about my dad. Thankfully, my father was taken in by kind strangers and brought back together with his family a few days later, but the horror of that time—hundreds of Zanzibaris of Indian descent were killed, thousands left without possessions or livelihoods after the revolution—remain with my grandmother until today.

Whenever I hear Donald Trump speak of Muslim registries, of building walls, I think of the Zanzibar Revolution, of my grandmother fighting to keep her family together and fleeing to the mainland all because she didn’t “fit in” to what Karume believed to be a “true” Zanzibari. I think of how this concept of othering feels benign right now, but has repercussions that lasts throughout generations. I am, proudly, the other, but I am worried about what that means in 2016 and the future.

This year has been a year marked by reading about the other, about experiences of those who are consciously excluded, who are made to feel different for no other reason than because they don’t fit a narrow mould of how some people feel the world should look.

Beginning with Ta-Nehisi Coates’ incredibly powerful Between the World and Me, I began an exploration of the Black American experience. It was an education I needed, consisting of essays and articles, the seminal works of James Baldwin and Ralph Ellison, the incredible journey described in Senator John Lewis’ series of graphic novels, March. It was an education I received through books and various documentaries and conversations—and it is one that I must continue, every day.

My education about the other included reading about the horrific treatment of women and the culture of misogyny at American colleges, and about the liminality of being brown-skinned in America. It included reading pieces of fiction—Americanah, The Brief Wondrous Life of Oscar Wao, A Manual for Cleaning Women, The Underground Railroad, White Teeth—all focused on characters who were marginalized and oppressed because of their race, gender, ethnic origin, or religion.

The year in reading has been a year of sobering reminder, of a re-education to the ways so many of us are made to feel excluded from the places we inhabit, and how so many are fighting, struggling, working hard to change that saddening reality.

You can find a list of all the books I read in 2016 over on Goodreads, and notes on some of those books in the Marginalia section of this site. You can also peruse my 2015 edition of A Year in Reading.