Flashing Palely in the Margins
October 25, 2019

An abundance of apples

Every year, by mid-October, our home is filled with an abundance of apples. 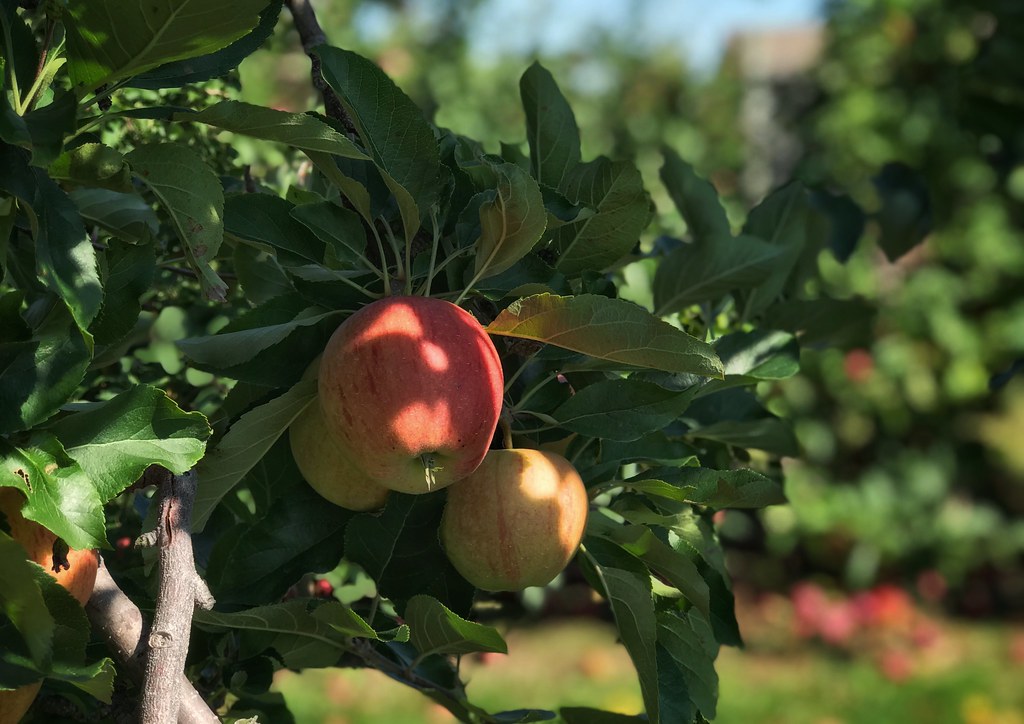 There are at least a dozen varieties in our fridge right now; the Honeycrisps and Cortlands dominate, but they are interspersed with Empires and Mutsus and McIntoshes and Jonagolds and Fujis and so many more. We picked our own early in the season at Great Lakes Farms, and then added to our stash during a visit to Crunican Orchards a few weeks ago. We are lucky to have so many places to pick and procure apples within a short drive from home.

By the time the snow starts to fall and the fall has turned to winter, the stores of apples will have dwindled. We will have consumed most of the fruit, and will have indulged in an excessive amount of crisps and crumbles and pies. There will be a few apples left rolling around in the drawer, and when I pick them up, I will think of the fall, think of being outside among the apple trees, and think of the sheer delight that an abundance of apples can bring.

So You Want to Leave Purgatory
Paige Lewis

Here, take this knife. Walk down
the road until you come across

a red calf in its pasture. It will
run toward you with a rope tied

around its neck. Climb over
the fence. Hold the rope like a leash.

You haven’t eaten in years. Think—
are you being tested? Yes, everything

here is a test. Stop baring teeth
upon teeth and leave the calf

to its grazing. Lift your arms toward
the sky and receive nothing. Keep

walking and think about the rope
around that calf’s neck. Consider

how fast its throat will be choked
by its own growing. Walk until you

understand what the knife was for.
Now forget it. Here, take this knife.

First, calm down.
Next, stay that way
for the rest of your life.

Progress is Not Inevitable, It Takes Work: “We live inside ideas. Some are shelters, some are observatories, some are windowless prisons.”

It’s so much more than cooking: “For those of us who cook frequently, planning and strategizing for meals becomes background noise. It’s part of the mental load, the running list of small decisions and knowledge required to maintain a household.”

Emotional socialism: “Whatever you have a surplus of, give it away.”

Why You Never See Your Friends Anymore: “A calendar is more than the organization of days and months. It’s the blueprint for a shared life.”

radiator season: “The weather has become the exact opposite of small talk. It is politics and panic and confessions, everything small talk is meant to guard against.”

What It’s Like to Go to a Fat Babe Pool Party: “Water, no matter where it was, always held space for me, no matter my size.”

Cash/Consent: “The things that sex workers do to stay safe are almost always the things civilians want to pass laws to stop.”

Ellen DeGeneres, Chris Evans, And The Celebrity Fetish For Kindness: “Ellen is still protecting herself and her community; the only difference is that, where once her community was other working- and middle-class queer people, it’s now the culturally powerful elite.”

We went to Portugal again and it was magical.

How to Build a Life Without Kids

Enough Leaning In. Let’s Tell Men to Lean Out.

How this chair became a pop culture icon

It’s about knowing that — seemingly against all odds, against the most antagonistic parts of my self — I have yet again made a home for myself in this burning world. And when I say “this is my home,” my home says “you’re damn right.”

In his rumination on Columbus, Saeed Jones reminds me why I’m happy with my life outside the big city, too. Wherever you find yourselves, I hope you’re able to make yourself a home in this burning world, too. Until next time, my friends.