Go back to your country

If I had a camera with me—or had the quickness and mental wherewithal to pull out my phone camera—every time I was told to “go back to your country,” I’d have enough footage for a very long feature film.

The outcry against a woman who told a group of Syrian men to “go back to their own country” at a Denny’s in Lethbridge has been loud and well-deserved. We can not, and should not, tolerate this kind of behavior. What’s shocking to me is hearing people aghast at this incident, as if it was an isolated one, as if it were some kind of anomaly.

I have been told to go back to my own country at least a few hundred times in my life. That might even be a conservative estimate.

Canada is racist. We need to face that fact head-on if we want to do something about it. Every time one of these incidents happens here, and people are shocked and surprised, I get angry: this has been the lived experience of people of color for decades, if not since the inception of this nation. Being shocked and surprised, saying “this isn’t my Canada” repeatedly, only tells me that you haven’t been listening to communities of color before, and you don’t plan to listen to us in the future.

This is your Canada. This is our Canada. If you haven’t noticed the problems until this week, then you’ve actually been part of the problem until now. People of color face this kind of horrendous prejudice every single day; stop telling us your Canada is better than this, and actually do something to make it better.

There has been a lot of writing about men, toxic masculinity, and misogyny recently, especially in light of the misogynistic terror attack in Toronto a few weeks ago, and in recognition ofBill Cosby finally being found guilty of sexual assault. Much of that writing of it is excellent; this piece by Jessica Valenti and this one by Wesley Morris are among the best.

This passage by Lauren McCain in What Sharp Teeth You Have is jarring and poignant:

I would rather be killed by a lion than by a man. When lions attack, it’s not personal. You’re either food or a perceived threat, and there’s nothing more to it—no basis in psychopathology or hatred or jealousy, no motivation to manipulate, no “mommy issues,” no rejection of moral standards, no intra-species betrayal. Lions are guileless. We accept that they are killers.

On a related note, this article on misogyny in sportswriting is timely and infuriating. (One of my favorite sportswriters working today is Mina Kimes; you should read her excellent, recent piece on Lamar Jackson.)

Like me, you’ve probably been listening to Janelle Monáe’s new album on repeat these past couple of weeks. This profile of her by Jenna Wortham is worth reading and revisiting.

We ate really well on our recent trip to Vancouver; I love watching the operations of a good restaurant, so this piece about “expediters” in restaurant kitchens was fascinating to me. I’ve been trying to get better at my home cooking recently too, so I’ve cracked open a few of the many cookbooks we have at home in order to get inspired. One thing I didn’t think about much until I read this piece in Eater is the lack of racial diversity in cookbooks.

While it’s not technically my full job, a lot of my work recently has been around promoting diversity and inclusion in our organization. Our numbers in our diversity report show that we’re doing much better than most, but there’s still a lot more we can learn from companies like Slack and how they operate.

In the end, stories are about one person saying to another: This is the way it feels to me. Can you understand what I’m saying? Does it also feel this way to you?

We definitely need to bring back the practice of baguette delivery.

As someone who lives with chronic pain in my lower back and my right knee—and doesn’t regularly take medication to treat the pain—I’m really intrigued by the idea of pain acceptance. 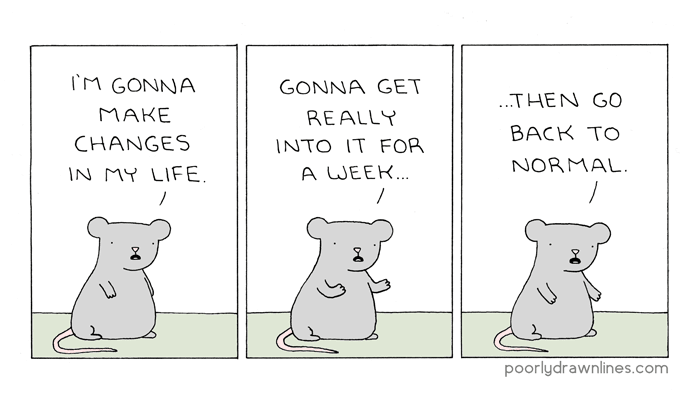