The first time I traveled to Thunder Bay, I was 15 years old.

My scout troop and I had decided that we wanted to go to the Jamboree, partly because it would be a good culmination to our scouting careers, but also because it was an excuse to go spend a week with people our age, away from home, with little supervision and lots of fun activities planned on water and in the mud.

We rented an old 8-seater van; our troop leader drove since none of us had our drivers’ licenses yet. The van was falling apart, and our leader stopped every 6 hours to take a nap. On one of the stops, a stranger came inside the van to say hi and just sit down and chat with us. After he left, we realized that he had peed in the car.

We drove the rest of the way with the windows down to get rid of the smell.

I don’t remember much about the 1997 Scouts Canada Jamboree, but a few things still linger in my memory. There was the night when a small tornado hit Thunder Bay and we were forced to sleep in the laundry room of the regional hospital because our tents had been swept away. There was the night the Barenaked Ladies played a concert and instead of going there with the rest of the scouts, I took a bus into town with a girl I had met at the Jamboree so we could have dinner and steal a few smooches away from the site. There was the morning that my leader came barging in, irate, because we had made the front page of the Jamboree newspaper — my friend had hurt his ankle a few days before, and instead of forcing him to hobble along on crutches behind us, we had stolen a shopping cart from a nearby grocery store, thrown him in, and just pushed him around the campsite. A multitude of people thought it was hilarious and snapped photos. One of those photos ended up on the front page of the newspaper; our leader made us return the cart that afternoon.

On the return trip home, the roof rack fell off the van while we were driving on a windy stretch of the highway in the fog. We didn’t notice until we were about a quarter-mile away; we spent the next hour running up and down a mostly-empty highway trying to salvage our gear. We managed to find about 90% of it.

Until about three years ago, I still had the walking stick I had bought, bearing the Jamboree logo, at the Scout Store on the campsite. 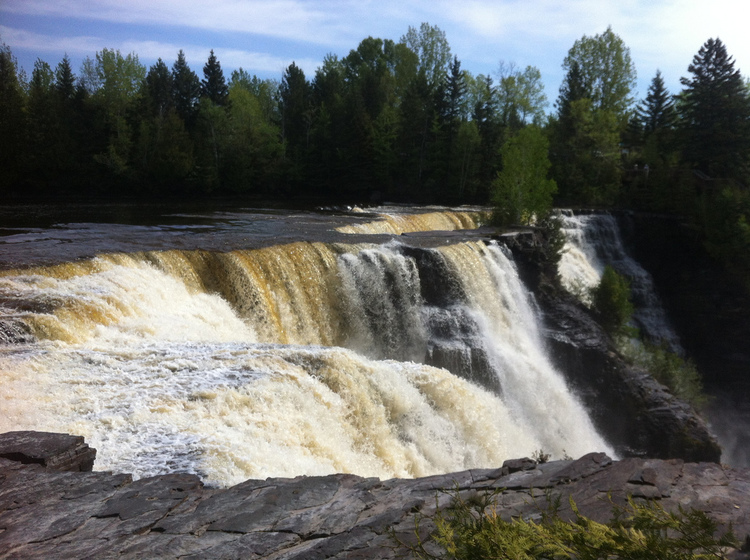 The second time I traveled to Thunder Bay, I was 19 and had just finished high school.

In my final year of high school, a few friends and I had decided to do some fundraising to build a school in Chimborazo, Ecuador. We were working with an organization in Ecuador that was helping us with logistics; we were to fundraise the money and then head to South America to help physically build the school.

We spent the year throwing impromptu concerts — I was in an a cappella group at the time—and baking apple pies. (I wasn’t the best at baking, but was really good at cleaning up. They used me in the kitchen for entertainment, good cheer, and my dishwashing skills.) By the end of the year, we had raised a lot of money, but it wasn’t enough.

The answer, of course, was to take our show on the road.

Among our group of friends, we had enough artistic talent to support a touring roadshow; some of us sang, some of us acted, some of us performed spoken word, some of us danced. Some of us, like me, did all of the above. We knew that if we threw small concerts across the country at schools and churches and community centres, we could raise enough money for our school in Ecuador.

We didn’t perform in Thunder Bay—we opted for Sault Ste. Marie as our northern Ontario show instead—but we did stop there for the day. A road trip with 14 people and two dogs in two vans was tiring; the long stretches of driving across the flat and uneventful prairies had numbed our senses by the time we got across the Manitoba border and into northern Ontario. Thunder Bay was our oasis: it was a city, but not a very big one.It was a place where we could stock up on snacks and watch a movie and restore our need for the urban landscape before we set back off on the road through the north.

I fractured my collarbone playing basketball two days before the trip. Because I’m stubborn, and because it was a tiny fracture that didn’t require any kind of cast, I didn’t tell anyone and kept dancing and singing through the month on the road, popping painkillers every few hours to numb the ache. My collarbone still has a numb ache, now, when I strain it too much; the ache reminds me of weeks spent in a van, and driving through places like Thunder Bay. 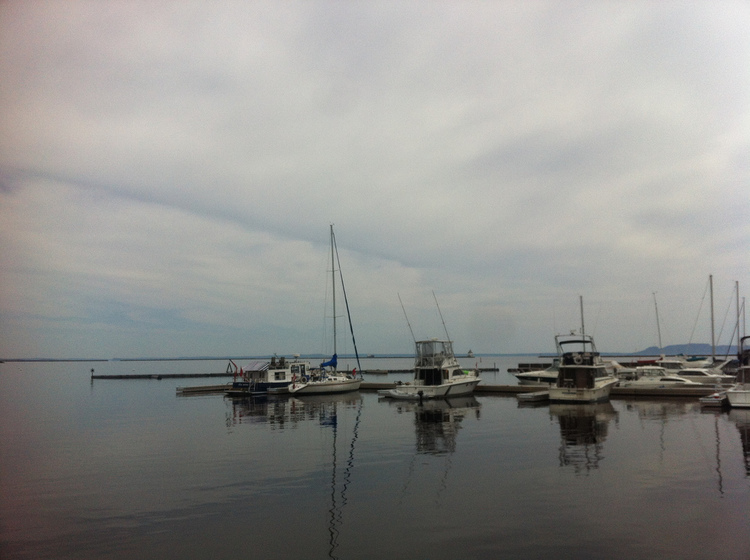 This past June, I made my third visit to Thunder Bay.

I was 31 years old, and a very different person than who I was during my previous two visits. L and I flew up for the weekend to celebrate Kate and Jonathan’s wedding, and just get away from the big city for a little while.

There aren’t many flights that leave Toronto and head to Thunder Bay every day; we ended taking a flight that landed just a few hours before the wedding. We rushed out of the airport, hoping to make it to the hotel quickly to shower, change, grab a bite to eat, and then head over to Fort William Historical Park for the ceremony. On the taxi ride to the airport, L asked the driver, “what’s the name of that hill up in the distance?”

His voice was stern when he responded that it wasn’t a “hill”, but instead Mount McKay. We spent much of the rest of the taxi ride in silence.

Before leaving for Thunder Bay, I had asked a few friends — people who had lived in the area before, or still had family there — for tips on what to do. Pretty much everyone mentioned the same things:

That last one had me perplexed, too. Luckily, Kate had left us a persian from The Persian Man in the hotel room when we arrived, so we were able to cross that one off the list fairly quickly. I’m not much for sweet things, so an icing covered baked good wasn’t quite my cup of tea, but it was still nice to experience something that was central to the culture of Thunder Bay.

The wedding was gorgeous and fun and happy and everything a wedding should be, and more. Kate was beautiful; the whole family was beaming and smiling ear to ear. I couldn’t help but smile too. We ate delicious food, danced through the night, and enjoyed being surrounded by rivers and ponds and forests and the sounds of the Northern Ontario wildlife. The frogs croaked loudly through the evening air.

Despite dancing until the wee hours of the night, we were up early the next morning for a trip to Kakabeka Falls and to the Terry Fox Memorial. At each place, I took some time to close my eyes and listen to the world around me — there was a serenity in the air around the region, and I could hear the faint whistling of the wind as it came across Lake Superior and flew through the trees that covered the cityscape.

We didn’t make it to the sauna — we did walk by and think about going in, but time was tight — but we ended our trip by eating some delicious Finnish pancakes. I was still full by the time we got to the airport and got ready to board our flight back.

I kept peering out the window at the city below me—much to L’s annoyance who had the window seat and had to deal with my constant leaning over—as we flew away. The sounds of the airplane engine were different than the ones of the wind and wildlife of Thunder Bay, but they were soothing just the same. 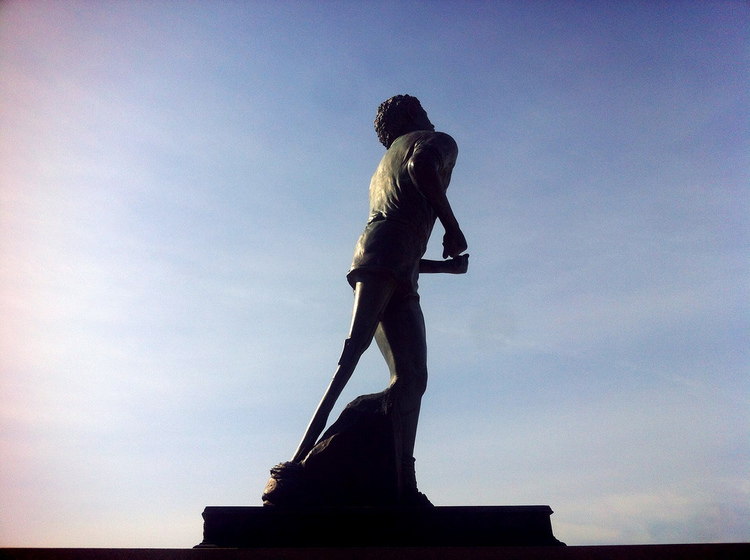 I do not know when I will next be visiting Thunder Bay, but I know I shall return eventually. Some people go their whole lives without visiting Northern Ontario, but the region has a draw that calls to me, from time to time. I will answer that call again, sometime.

More importantly, I do not know who I will be when I next visit Thunder Bay.

I will not be the impetuous 15-year-old, stealing grocery carts and sneaking away with a girl on my first long trip away from home without my parents.

I will not be the idealistic 19-year-old, hiding my broken bone so that I could drive across the country with friends and feel like I was making a difference in the world.

I will not be the hardened 31-year-old, escaping the hectic pace of the city and taking time to close my eyes and remember that, despite the hurt and pain I was still healing from, the world around me is beautiful and serene.

I will be someone else entirely. Who I am then, when I return to Thunder Bay, will shape the way I see the city in a whole new way.

The city will, as it always does, remind me to see the world in a new way as well.

I’ll be back soon.