Flashing Palely in the Margins
January 8, 2021

When the evening arrives, Zoya knows it’s time to sleep because of our bedtime routine, which includes the singing of many lullabies. We sing many lullabies, in at least three different languages, as part of our repertoire, but L and I each end up favoring some over others, and repeating them every evening as we put Zoya to sleep.

There’s one rhyme in particular that I sing to Zoya every day; it is in Gujarati, and I’m almost sure I don’t pronounce all the words right. All I know is that it is soothing to our little one, and it is soothing to me, too.

Nobody taught me that rhyme to sing to Zoya, but instead, I sing it from memory: it is a lullaby that my grandfather used to sing to me, deep into my childhood. It is a monsoon song, celebrating the coming of the rains and the communal sharing of food. My grandfather passed away when I was but eight years old, but among the many memories I have of him, I have his face singing me this song in the evenings before going to sleep.

I like to think that my grandfather is still here, in some way, rejoicing the new arrival to our family. And I like to remember his voice singing that rhyme, knowing that when I sing it to her, he’s there singing along with me.

Give Me This
Ada Limón

I thought it was the neighbor’s cat back
to clean the clock of the fledgling robins low
in their nest stuck in the dense hedge by the house
but what came was much stranger, a liquidity
moving all muscle and bristle. A groundhog
slippery and waddle thieving my tomatoes still
green in the morning’s shade. I watched her
munch and stand on her haunches taking such
pleasure in the watery bites. Why am I not allowed
delight? A stranger writes to request my thoughts
on suffering. Barbed wire pulled out of the mouth,
as if demanding that I kneel to the trap of coiled
spikes used in warfare and fencing. Instead,
I watch the groundhog closer and a sound escapes
me, a small spasm of joy I did not imagine
when I woke. She is a funny creature and earnest,
and she is doing what she can to survive.

Throw scissors at it.
Fill it with straw
and set it on fire, or set it
off for the colonies with only
some books and dinner-
plates and a stuffed bear
named Friend Bear for me
to lose in New Jersey.
Did I say me? Things
have been getting
less and less hypothetical
since I unhitched myself
from your bedpost. Everyone
I love is too modern
to be caught
grieving. In order
to be consumed
first you need to be consumable,
but there is not a single
part of you I could fit
in my mouth. In a dream
I pull back your foreskin
and reveal a fat vase
stuffed with crow
feathers. This seems a faithful
translation of the real thing. Another
way to harm something is to
melt its fusebox,
make it learn to live
in the dark. I still want
to suck the bones out
from your hands,
plant them like the seeds
we found in an antique
textbook, though those
never sprouted and may not
have even been seeds.
When I was a sailor I found
a sunken ziggurat, spent
weeks diving through room
after room discovering
this or that sacred
shroud. One way to bury
something is to bury it
forever. When I was water
you poured me out
over the dirt.

Sit at this table and feel my love in these roses, these oranges, these oysters, this smooth stone. Take this glass and tell me: Do you still experience even your basic needs as rotten? Do you still treat your deepest desires like unwieldy garbage that needs to get taken out before it stinks up the whole kitchen? Or have you finally learned to listen to your whispering cells, sleeping with their clothes on, ready to fight or flee at a moment’s notice, ready to slink through the dark, with or without you?

I miss parties a lot. I miss other people’s kitchens, and cabs across bridges, and the specific kind of loose acquaintance I would be overjoyed to see in a crowd at bar or a bookstore or somebody else’s house but absolutely would never call on the phone or arrange a Zoom hang with or text to check if they’re ok. I miss friendships that had nothing to do with crisis. I miss crowded rooms and I miss loving people without worrying about them. I miss irresponsibility and frivolity and laughing too loudly and going outside in the cold without a coat for ten minutes because the room had gotten too warm, going outside with one friend because “I have something to tell you but I can’t say it inside.” I miss revelations that were about gossip instead of death. I miss caring about stupid shit; who was talking to whom, who was looking at me, whether I had embarrassed myself. I miss embarrassing myself.

That wasn’t me. Even when I felt too big or too small, I always belonged to myself. I gave away all I could give, but I was never pretending or playing a role. I liked to improvise, even when the audience got up and wandered out.

COVID-19 has revealed the shortcomings of the nuclear family, Amil Niazi:

The pods so many of us formed this summer and fall are a great example of a way forward. Whether it’s with our own parents or with other young families, we need to shift our reliance on the traditional nuclear family and embrace intergenerational living or co-living. We have a once-in-a-generation opportunity to reimagine family — to bridge the divides within our own larger units, but also to choose our own extended families, whether with other parents or our close networks.

Ted Lasso starts with an American who has failed upward—a handsome, straight, white dude, brought in to be a leader in a sport he knows nothing about. It ends up, however, telling the story of a team coming together against the odds. Every main character in Ted Lasso begins as a tired trope that warms into something else.

There is nothing quite like the obvious lack of bustle in a dining room that has not properly served its purpose in nine months. There are restaurants all around Toronto (indeed, in cities around the world) that now exist as microcosmic ghost towns. The hole left behind as COVID-19 tore through these spaces, and our psychology, is hard to articulate, especially as we are still inside it.

After the pandemic is over, let’s not rebuild chef culture, Corey Mintz:

Food media needs to highlight the good work done by teams, and acknowledge the group, rather than laud the individual. If the chef deserves praise, it should be for leadership, not auteurship. Let’s focus on the work, the ideas, the food, the experience, and do away with the narrative crutch that there must be one person at the centre of every restaurant, someone who deserves to get levelled up, to be placed on a pedestal until such time that they can be torn down because it turns out they were a monster.

The Business of A Marriage, Besner:

Our emergency savings are in the joint account we opened with our wedding money. The teller who helped us was named Neena, and it was her first joint account too—first week on the job, she confided. A younger woman hovered over Neena, occasionally pointing out where to click on the screen. When our provincial government declared a state of emergency on March 17th, we spent some of our wedding money on a sack of rice, a gallon of olive oil, and a deep freeze. I’m still confused about the deep freeze—a couple of months ago we were vegetarians, and now we are talking about spending hundreds of dollars on an eighth of a cow in case global food supplies give out. But the deep freeze seems to make my husband feel safer, and in our household’s current economy, even an illusory sense of safety has a value higher than gold.

These tea bag watercolor paintings by Ruby Silvious are stunning: 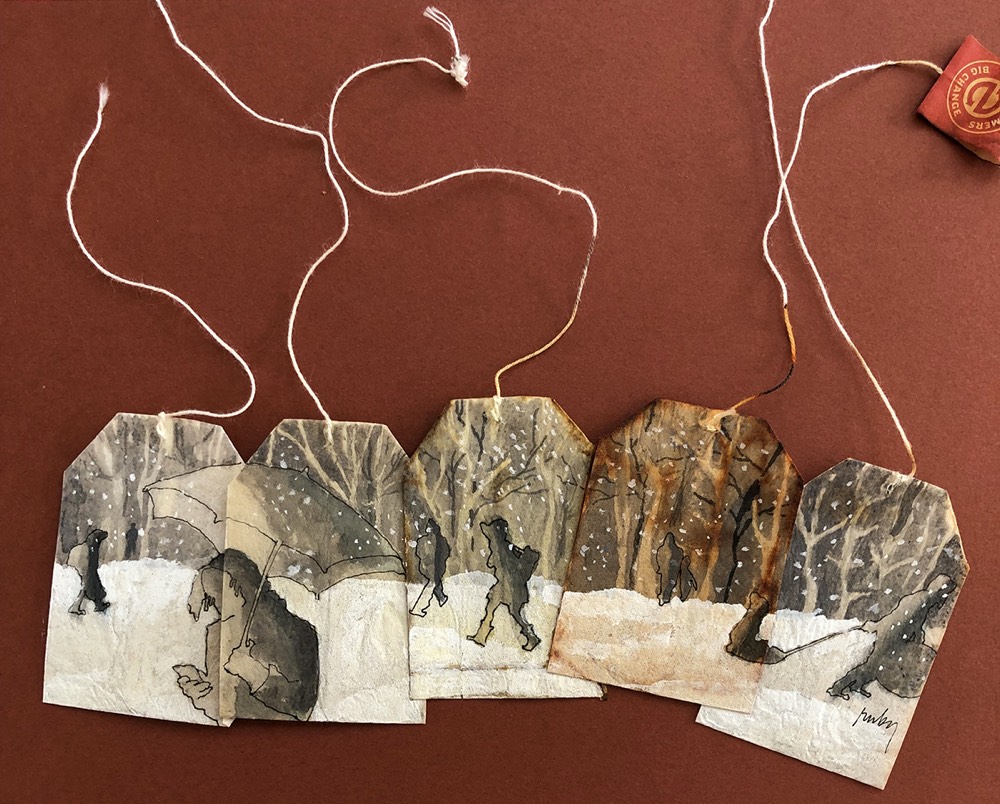 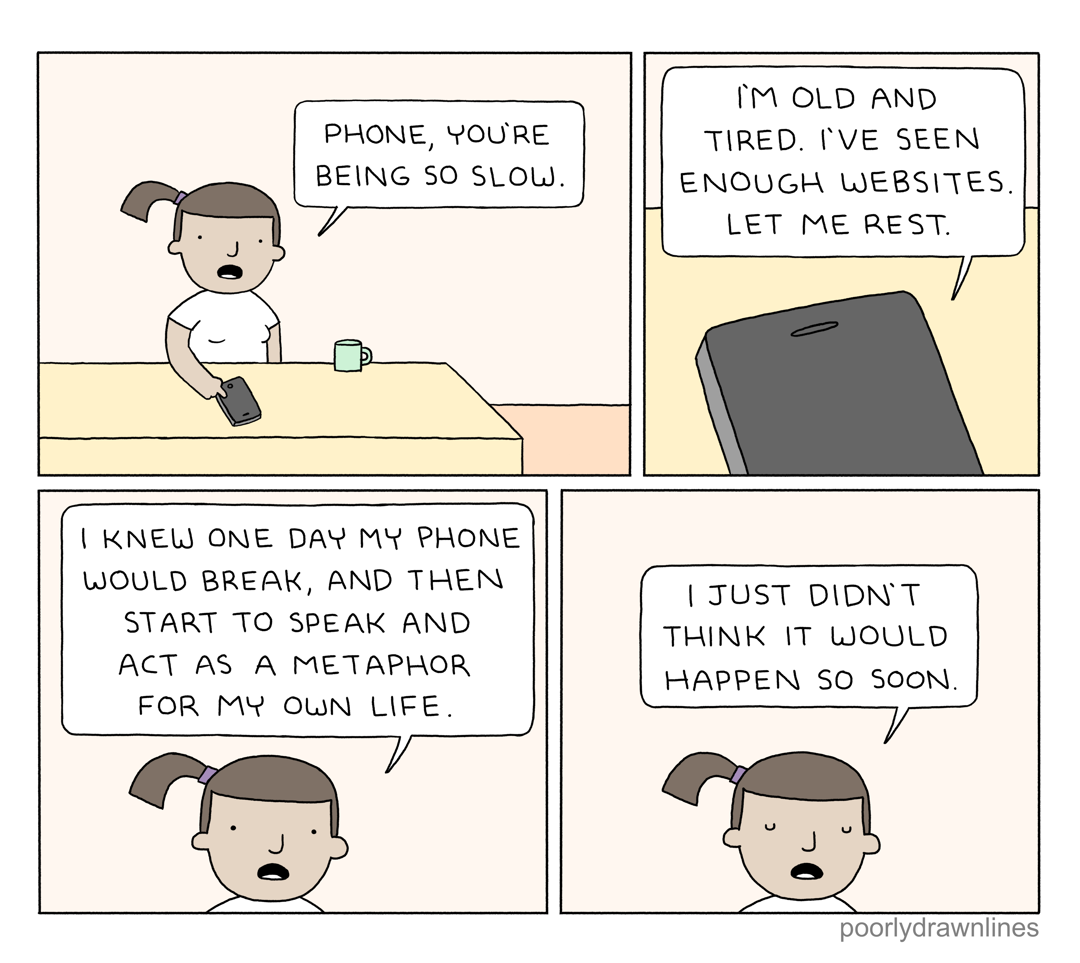 A short video on how soy sauce has been made in Japan for the past two centuries: