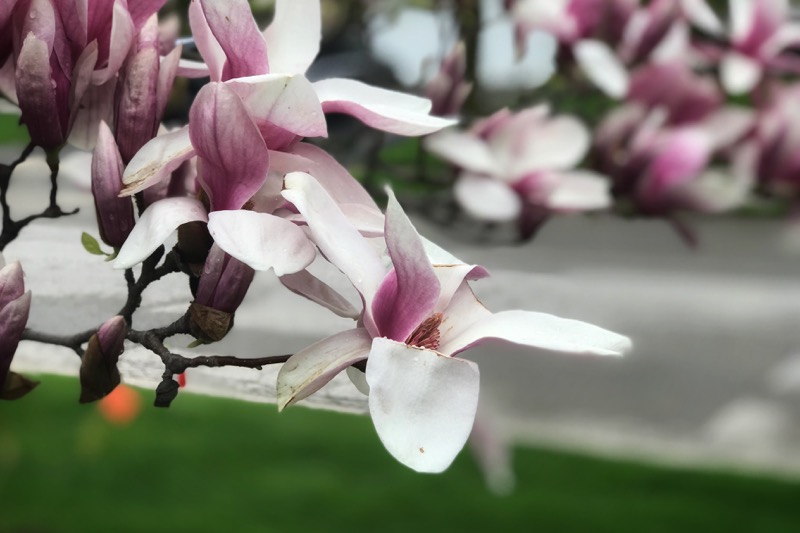 The hopefulness of the bloom

The magnolia tree in our front yard burst into gorgeous flowers about two weeks ago.

While everything was in bloom, the tree was a ball of white and pink delight, bringing me joy every time I looked out my office window and into the yard. It isn’t the largest tree, but when it is flowering, it is a striking one, noticeable from down the street because of its gorgeous color and vibrancy.

This morning, half of the flower petals had fallen off the tree and lay littered on our yard. By tomorrow, the rest of them will most likely have been shed, as well.

At first, I thought that the beauty of the magnolia tree, like so many kinds of beauty, was fleeting: arriving quickly and leaving just as abruptly. I know now that this is wrong. The beauty of the magnolia tree is everlasting, ever-present. The tree is not just beautiful when it flowers, but throughout the year, when it is holding the immense possibility for the bloom. Its beauty is not in the burst of color for two weeks of the year, but instead in the symbol of its potential; like so many things in the world around us, there is a beautiful hopefulness in the stillness before the performance.

The magnolia tree is a reminder that, while it is easy to get distracted by the pop of color, real beauty lies in the hard work that it takes before the bloom. We must cherish the duller days for the hope that they embody for the flowering to come. 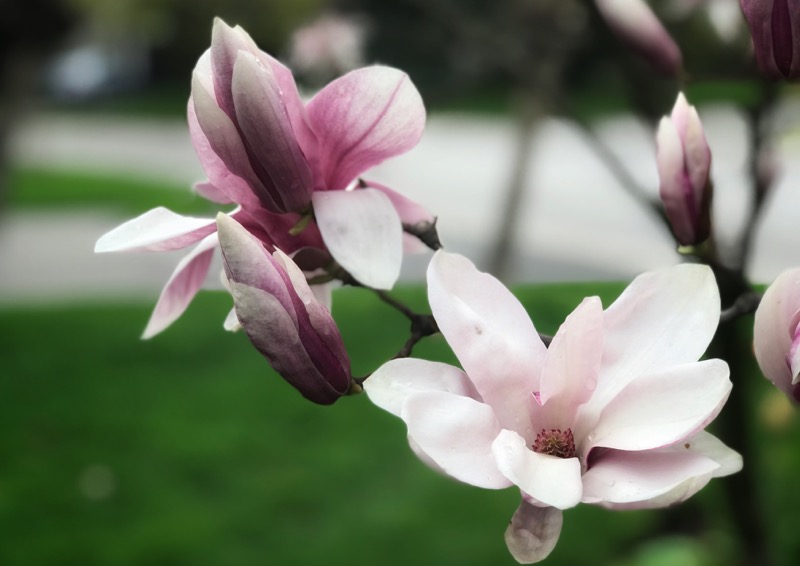 Wearing nothing but snakeskin
boots, I blazed a footpath, the first
radical road out of that old kingdom
toward a new unknown.
When I came to those great flaming gates
of burning gold,
I stood alone in terror at the threshold
between Paradise and Earth.
There I heard a mysterious echo:
my own voice
singing to me from across the forbidden
side. I shook awake—
at once alive in a blaze of green fire.

Let it be known: I did not fall from grace.

I leapt
to freedom. 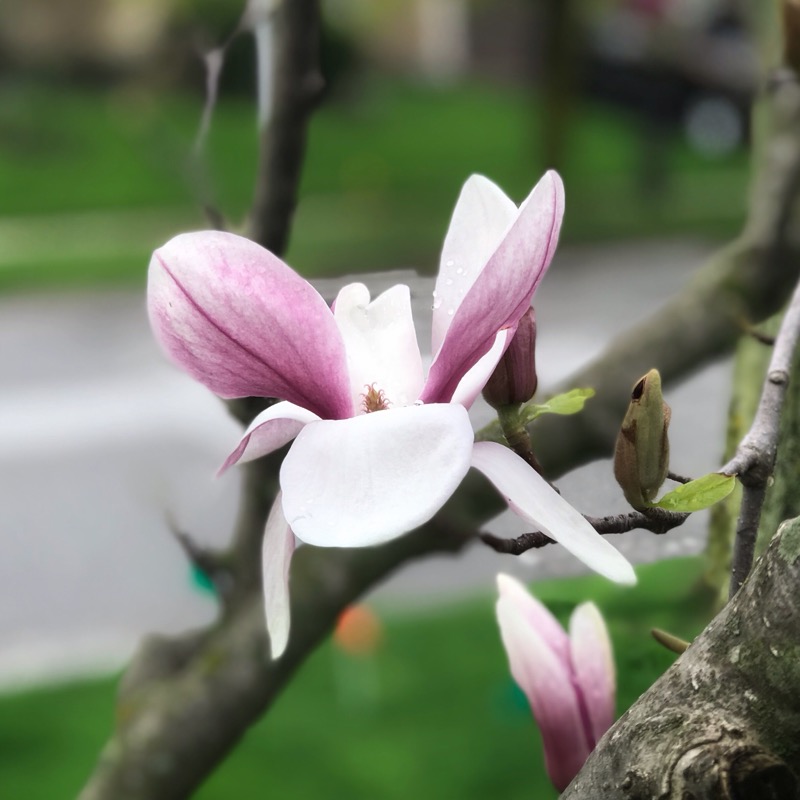 I listen to a lot of podcasts (I subscribe to over 100 of them) and recently I’ve been thinking about what all that podcast listening means to my life and my engagement with the world:

Instead of emotion or camaraderie, what podcasts produce is chumminess — reminiscent of the bourgeois club atmosphere, reconfigured as the desperate friendliness of burned-out knowledge workers. They aren’t pieces of media so much as second jobs or second lives — a way to pursue our hobbies when we have no time to spare, to have smart people talk at us when we have no time to think, to have new books summarized when we have no time to read. Our relationship with podcasts exists in uninterrupted parallel to the rest of our existence, a wealth of knowledge ready to be tapped at any moment. Podcasts intensify our saturation while pretending to relieve it.

“Understanding that a key way of managing anxiety is to take control, people with high-functioning anxiety tend to be planners and list-makers,” Clark said. “In staying on top of things, they can keep their anxiety in motion, which helps them live their life optimally.”

But because you constantly expect yourself to go the extra mile in every area of your life, these lists and schedules can be more grueling than is reasonable, Clark added. As your anxiety builds and fatigue sets in, you might find yourself prioritizing your time in the form of avoidance or flaky behavior, which can exacerbate your anxiety even more.

We spend so much of our days in the kitchen—cooking, chatting, just hanging out—that I often forget that the notion of the kitchen as focal point of the house is a relatively new idea:

Viewed through a 21st-century lens, kitchen politics usually fall along the fault line of gender and domestic labor: We debate who does their share of the housework and cooking in a family, and what that means for women’s professional development and personal wellbeing. The fault line prior to the mid-20th century wasn’t gender, but class. We’re used to thinking of kitchens are a universal kind of room that almost everyone has—as essential as a place to sleep, or a bathroom. Our great-great-grandparents were not.”

As someone who has innumerable weak ties—L jokes that I like to make a dozen new friends each day—I can attest that these low-stakes relationships really do help me feel like I belong wherever I go:

A 2014 study found that the more weak ties a person has (neighbors, a barista at the neighborhood coffee shop or fellow members in a spin class), the happier they feel. Maintaining this network of acquaintances also contributes to one’s sense of belonging to a community, researchers found.”

Mira Jacob on The Maris Review:

I never saw myself. I never saw any lives that looked like mine. And what happens, when you’re living in that world, […] what that actually means when you don’t have those books, is that you can not imagine your own interiority—because you get to think that your interiority is not something worth imagining. It’s such a sad way to live.

A frightening but poetic paragraph about the current climate crisis, and the world we are leaving those who come after us:

A world, by definition, will not let itself die. As soon as it goes, with it goes its values, its beauty, its defeats. Another world takes its place, no better and no worse. For the first time in the fragmented journey of homo sapiens, the world to come will be worse than the previous one. Our species just suffered its greatest narcissistic blow, maybe worse than those brought upon it by Copernicus, Darwin and Freud: the scandalous news that we took part in our own destruction and that of everything around us.”

I’m convinced that income inequality is one of the biggest problems we face in contemporary society, so seeing this experiment in freezing executive salaries to raise minimum wage incomes was heartening:

I challenged the chief financial officer to see how deeply we would have to freeze wages in order to reach our goal of a base rate of $15 per hour.

The answer was that we did not have to go very deep. Over the last few decades executive salaries have skyrocketed. That translates into accelerated wage growth in the highest tiers of executives throughout American business, and it affects every company.

What that meant for our company was that if we just froze the wages of our most senior team — less than 20 executives — we could radically increase the wages and improve the lives of nearly 500 of our teammates.

As a huge fan of all things language, all things Portugal, and all things sardines, I totally want a copy of Joana Avillez’ newest zine chronicling Portuguese idioms, A Sardinha Zinha. 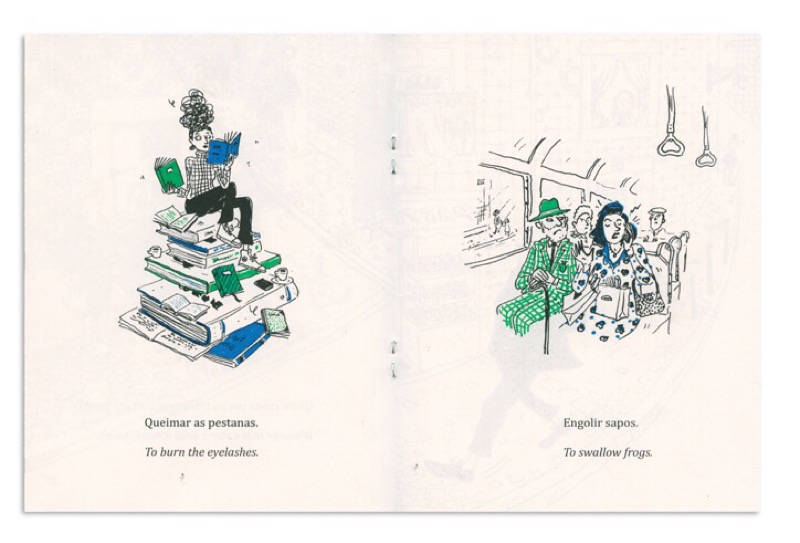 Find beauty in your potential this week, my friends. I’m so glad to have you in my life, in whatever small way it may be.