This year, more than most, I’m looking at Nowruz, the Persian New Year, as my real beginning to the year.

I’ve always loved celebrating Nowruz over the years. The day is marked by a large celebration with my family, and the timing feels more natural for embracing the arrival of the new year: the spring has arrived, the days are longer, and life begins to emerge all around us. The world is celebrating a new beginning; it only makes sense that our calendars would mark this beginning, too.

I had plans at the start of January when 2019 rolled into view. I was excited for the year to come and everything I was going to do in it. And then—everything changed.

My depression and my anxiety came back, both together, in full force, after laying dormant for a while. I had to change my medication, find a new therapist, and start pulling myself out of the community work I was doing in order to ensure I made time to take care of myself. The year had begun, but for me, I had just gone backwards.

I am feeling much better, these days. I’m still working through some of the bigger things I need to grapple with, but overall, I’ve found a nice balance on my medication, and I’ve rediscovered some care routines that have managed to pull me out of the deepest darkness. I still don’t feel like myself, and still need lots of time to recover from the heaviness of the day, but I’m well on my way to feeling like me, to being me.

The timing of my re-emergence is fortunate: the spring has arrived, and with it, a different disposition. I’m ready to start the year again, to hit reset and start afresh. That yesterday was Nowruz is serendipitous, and that this marker of the new year feels more positive and optimistic is invigorating.

Today is the first day of my new year. I can’t wait to see what the year ahead has in store.

i am running into a new year
Lucille Clifton

From Canary in a Coal Mine: How Tech Provides Platforms for Hate:

It would seem that we have a moral quandary where two sets of rights cannot coexist. Do we protect the privilege for all users to say what they want, or do we protect all users from hate? Because of this perceived moral quandary, tech has often opted out of this conversation altogether. Platforms like Twitter and Facebook, two of the biggest offenders, continue to allow hate speech to ensue with irregular to no regulation. […]

We must protect safety over speech.

From We can never speak freely:

For the most part, when it comes to speech, “how free is it?” is the wrong question to be asking. What we should really be interested in is who we speak with, who speaks alongside us; what exactly we are speaking for. Not “does this offend you?” — but who might our speech harm? Only by coming up with the right sort of answers, to these sort of questions, will we be able to figure out how to speak usefully, and well.

From A Time for Refusal:

Evil settles into everyday life when people are unable or unwilling to recognize it. It makes its home among us when we are keen to minimize it or describe it as something else. This is not a process that began a week or month or year ago. It did not begin with drone assassinations, or with the war on Iraq. Evil has always been here. But now it has taken on a totalitarian tone.

From How Pi Made Us Modern:

In taming infinity, Archimedes paved the way for the invention of calculus 2,000 years later. And calculus, in turn, helped make the world modern. Archimedes’s mathematical strategy is used in computer-generated movies, approximating Shrek’s smooth belly and trumpet-like ears with millions of tiny polygons. The smooth glide of an Ella Fitzgerald song is digitally represented in streaming audio by an enormous number of bits.

In every field of human endeavor, from reconstructive facial surgery to the simulation of air flowing past a jet’s wing, billions of tiny, discrete elements stand in for an inherently smooth and analog reality. It all began with the computation of pi. Pi represents a mathematical limit: an aspiration toward the perfect curve, steady progress toward the unreachable star. It exists, clear as night, with no end in sight.”

From Why are we so worried about “Instapoetry”?:

So perhaps “Instapoetry” is just the latest in a long line of poetic terms that can in the words of British poet and critic Sandeep Parmar, frame “work by poets of colour as unliterary”, as with “‘light verse’, ‘performance poetry’, or whatever dog whistle might be on the go at any time”. McNish says the label is “an obvious and easy way to belittle the writing” (though she adds of her own work: “I know it’s not the best poetry”). Kaur sees criticisms of her work as a kind of gatekeeping: “We have a form of art that is highly, highly traditional — meaning poetry — and then you have this other thing which is new and quite non-traditional, which is of course social media. And so the gatekeepers of these two things are kind of confused at this moment.”

From This year’s hottest cultural trend is eggs:

If you listen closely, Ariana Grande’s hit single “thank u, next” sounds like she’s saying, “thank u, eggs.” […]

Ariana isn’t to blame for any of this; she loves the eggs, eggs give her life and energy. She’s thankful. For the eggs that symbolize rebirth and life, I am too, as long as they don’t give me heart disease, which, I guess, will only happen if I eat too many.

From Andrea Dworkin’s Argument Against Punctuation:

reading a text which violates standard form forces one to change mental sets in order to read. there is no distance. the new form, which is in some ways unfamiliar, forces one to read differently— not to read about different things, but to read in different ways.

From LEAH: Be Yourself:

Unfortunately I think the best advice comes from Nike, and that advice is, ‘just do it.’ ‘Be yourself’ sucks because you’re being yourself probably the most when you’re giving into your worst tendencies,” she wrote. “If I were to ‘be myself’ I would be in bed talking to no one at all times. That’s very ‘me.’ There have been a lot of times when I’ve been held back by fear of failure or humiliation, and friendships and experiences and career-related things I’ve missed out on because I’m very nervous and very shy. But that’s where ‘just do it’ comes in, via Nike. All of the good things I have are because I just tried to do exactly the thing I wanted, over and over and over again. Or because I said yes to something daunting when I desperately wanted to say no. I think it’s good advice: just do it.

I’ve been so annoyed by the conversation about Elizabeth Holmes’s voice in the wake of the HBO documentary. What kind of person fakes their voice? A cis woman trying to project authority at work. A trans women who wants her voice to more closely match her gender identity. A person who’s been skewered for perceived “vocal fry” in dozens of podcast reviews. Imagine what it feels like to be reading all this stuff about Holmes’s voice—which is honestly one of the least objectionable things about her—if you’re a person who has ever made a conscious choice to moderate the way you speak in a world that’s biased against you. We should be dragging Holmes for endangering people with fake blood tests and treating her employees like garbage, not for her vocal pitch.

Psychiatry remains an empirical discipline, its practitioners as dependent on their (and their colleagues’) experience to figure out what will be effective as Pliny Earle and his colleagues were. Little wonder that the history of such a field—reliant on the authority of scientific medicine even in the absence of scientific findings—is a record not only of promise and setback, but of hubris.

I’d love to see more museums taking on this practice of adding context and more information to exhibits and representations that are either historically inaccurate or convey stereotypes and misjudgments of non-White people.

We’re going to see Queen (sans Freddie Mercury, with Adam Lambert) in July, so this piece on band “reunion” tours without all the original members was a timely and interesting read.

If they are ever going to re-imagine The Fresh Prince of Bel-Air for a current age, please let this be the way they do it. I would would delightedly binge-watch this show:

Part of my vocal training when I was younger included being able to isolate exactly where in my mouth every sound was being made, so this phonetic map of the mouth brings back some memories:

I used to have a habit of thanking someone I love or admire every single day, just so they knew how much they were admired while they were alive. I’ve fallen out of that habit, but this SMBC comic reminded me to start back up again: 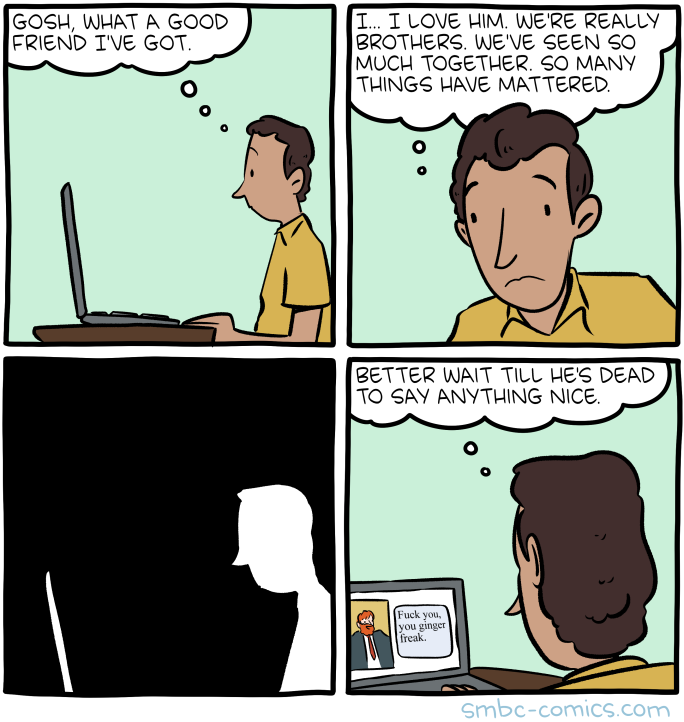 Happy new year, my friends. I hope you’re able to pause, reset, and begin anew, too.